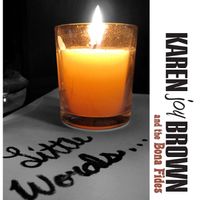 From the recording Little Words

What would you do
if I showed those little words to you?
Whose tiny hands keep tugging at my skirt
Just little words

There’s no reprieve, we have to grieve
For all those precious things that went before
Hopeless to lie, ‘cause I’ve already died
Yes, I’m just a ghost who’s rattling the chains

Such wild nights, mere mortals, angels fight
First chance to tell the story seen with altered eyes
Who could refuse seduction by such muse?
A holy consummation joining
Little words